Monument to the Discoveries

A stylised caravel seems to be setting out to sea, with Henry the Navigator in its prow. On the two lateral ramps ascending to the symbolic figure of the Prince are some of the significant characters of the Portuguese overseas expansion and cultural names from the age of the Discoveries, 32 in total, all portrayed with symbols that allude to their identity: navigators, cartographers, warriors, colonisers, missionaries, chroniclers and artists.

Composed of a vertical element consisting of a stylised mast oriented North-South, with two Portuguese coats of arms on each side with its five small shields, surrounded by a band with 12 castles and stylised fleurs-de-lis in the centre.

On each side are three triangular structures, each with one curved side, giving the illusion of sails blown out by the wind.

In the middle of the monument, a flight of nine steps gives access to a platform with a view over the entire surrounding area.

The second flight of five stairs and a portal with a round arch formed by vaulted stones lead through to the interior of the monument.

The monument is flanked by two metal armillary spheres on two parallelepiped platforms.

Flyer about the Monument to the Discoveries 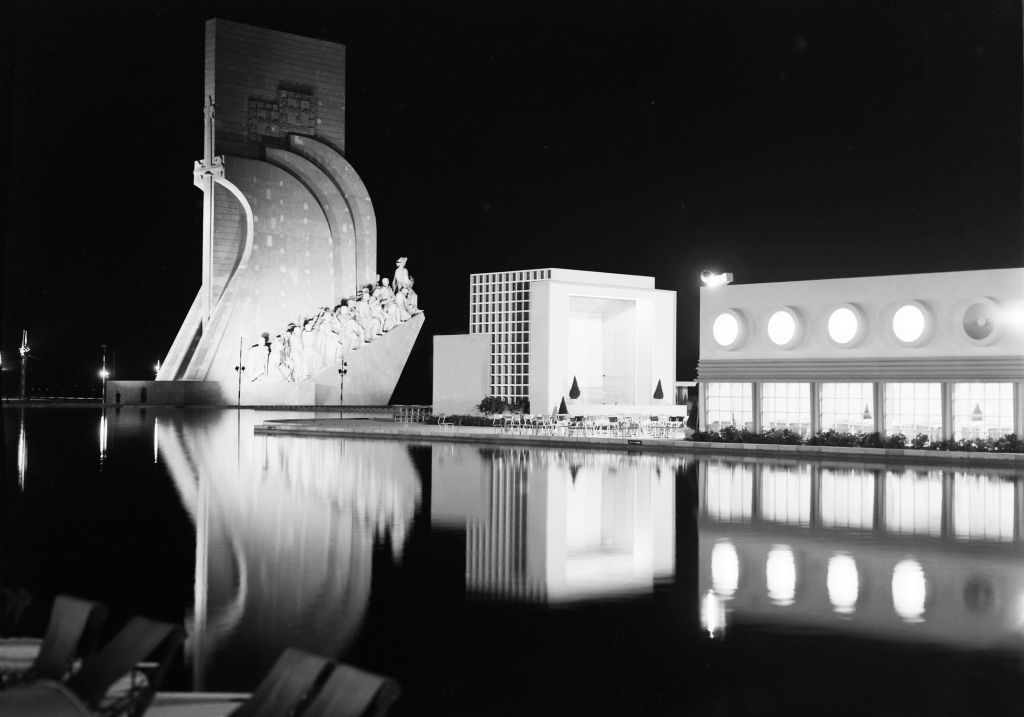 The decision to build the Portuguese World Exhibition in Belém made the most of the symbolic relationship between Portugal and the River Tagus, and more specifically the place from where boats embarked on exploring unknown seas and lands from the 14th century onwards. The Jerónimos Monastery forms the backdrop, extending the exhibition space from the Praça Afonso de Albuquerque to the Torre de Belém.

The exhibition was arranged around the Praça do Império, a space joining together the pavilions and special sections.

Forming a quadrangle with the ‘Monumental Fountain’ at its centre, the square was bounded by the main exhibition pavilions; the Pavilion of the Portuguese in the World, designed by Cottinelli Telmo, on the western side, and the Pavilion of Honour and Lisbon, designed by Cristino da Silva, on the eastern side. These pavilions were perpendicular to the river yet separated from it by the Avenida da Índia and the railway line. At the southern end of the square was the ‘Water Mirror’ by António Lino and the ‘Monument to the Discoveries’, also designed by Cottinelli Telmo in collaboration with Leopoldo de Almeida, situated alongside the Belém docks and in line with the square. Another symbolic element was the ‘Portuguese Ship’, a vessel created as a faithful replica of a Portuguese galleon from the 17th to 18th centuries.

1960 Fifth centenary of the death of Henry the Navigator 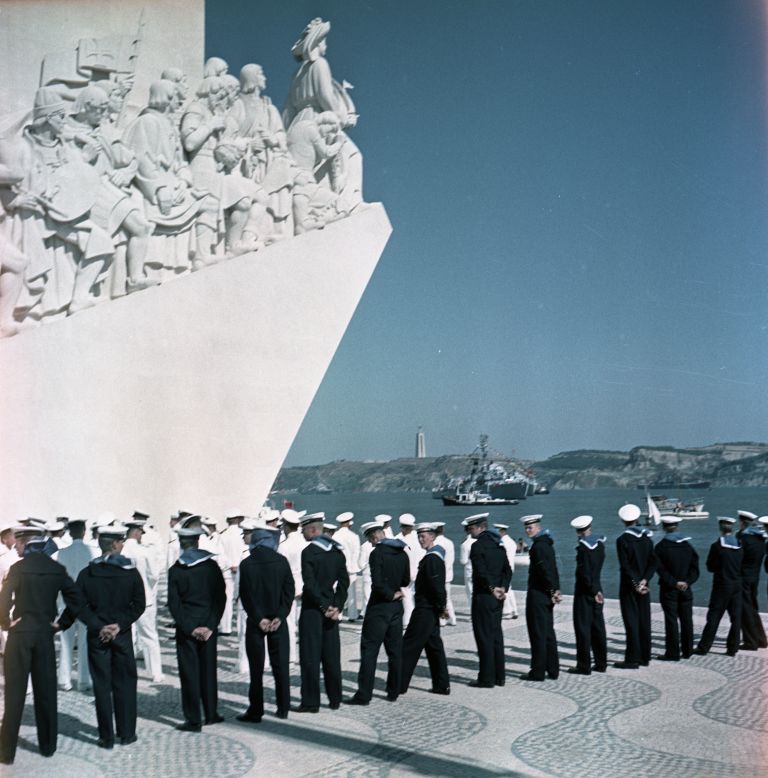 In 1960, on the occasion of the commemoration of 500 years since the death of Henry the Navigator, the monument was reconstructed in concrete and rose-tinted Leiria stone, with sculptures made of Sintra limestone masonry.

The project, designed by Cottinelli Telmo, was then carried out under the guidance of António Pardal Monteiro. Stability studies were conducted by the engineers Edgar Cardoso, Ruy Correia and António Abreu. Work on the interior was implemented by António Pardal Monteiro, while the surrounding area was laid out by the architect Cristino da Silva.

The sculptures were modelled by Leopoldo de Almeida, with the help of the sculptors Soares Branco and António Santos.